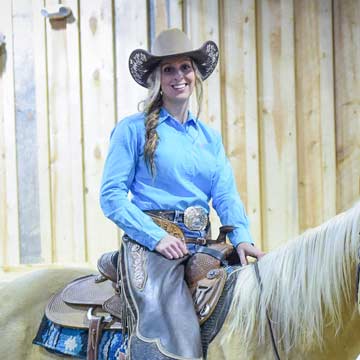 Over a decade of Professional Experience

Ashley Purdin teaches horses and people to become confident in their own skills and abilities on both recreational and competitive levels. As a life-long student herself, Ashley continues to learn under prominent trainers. Ashley spent four years training under NRHA trainer Fred Berschauer and was the top rider for 2010 Parelli Fast Track.

In 2011, Ashley graduated MidAmerica Nazarene University with a degree in Business Administration. She believes that the horse world is filled with many talented trainers but few of them are business-savvy. Ashley comes from a family of entrepreneurs and that along with her degree from MNU has instilled in her the values of strong client relationships built on good communication, trust and honesty.

Ashley currently starts colts and trains horses for ranch pleasure, cowboy racing and trail riding. She specializes in teaching people how to personally overcome their horsemanship problems and instill rider confidence to gain willing cooperation from their horses through easy to understand psychology and simple training principles. Along with a busy training, lesson and clinic schedule, Ashley also competes in the UHCA and EXCA (cowboy racing clubs). She had a great year in 2014 winning EXCA State Championships in Kansas and Missouri as well as winning several UHCA races.

Perhaps the success of Ashley’s teaching and training program is best demonstrated through what she has helped her students achieve. Though success in competition is just a small part of what her students have accomplished with their horses, here is a list of “Team Pioneer’s” competitive achievements: